This month has been creative and busy.  Keep moving keep warm 🙂

A few weeks ago I mentioned I had been asked to provide vocals for the fab band Bowker.  These guys have written a concept album called Sail to the Deep and needed someone to be their ‘Valentina’.  I was really honoured to be asked, it was also a pretty big challenge but very exciting! I have never just provided vocals before and for this one it was also vocals with no words…so…listen I did…over and over to the amazing atmospheric chunky guitar/bass/drum track they sent me.   After I felt I’d suitably absorbed the music I started to get a feel for the character and it was a lot of fun singing my heart out for this.

The launch was a few weeks ago at Lomax, Liverpool and I went along to perform. Cracking night.  Here are a couple of pics. 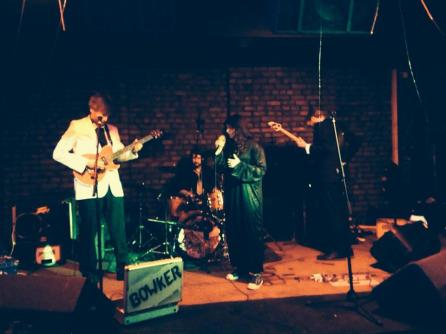 The album is released in November.

Another guest appearance for me came in the form of Tiki Black. Tiki is a fantastic songwriter and though we have crossed paths at gigs and she has also been very supportive of my music, we had not yet worked together.  Tiki asked me a couple of months ago if I would play some guitar on her track ‘Free Like Smoke’.  It’s a beautiful song and when I had a closer listen I could really hear some vocal harmonies in there too.  So, I jumped in and had a play.  Luckily for me that was appreciated…. The track sounds great and I will update when and where this will be available once I know.  This was also featured on Roots & Fusion and can be heard here.

SUMMER STUFF– Over the summer I had lots of fun playing at various festivals.  One of which was on my doorstep at the Sefton Park Food & Drink Festival.   I had the opportunity  to combine my two favourite things of coffee and music and played at the Liverpool  Live TV/Quills Coffee stage.  LLTV were ace enough to wield their video skills and recorded my song Woollen Hearts…

This weekend I discovered that my song Sun shines under water (from Chasing Tales EP) was included on Tom Robinson’s MIXTAPE (BBC6 Music Introducing.. Fresh on the Net): I have been lucky enough over the last year to have 2 other songs (Chopping Wood & This Garden) from the EP also featured on the show.  It’s a top resource for independent musicians and I’m very proud.

That’s it for now!  You’ll find me walking around in the Autumn air finding inspiration for new songs.